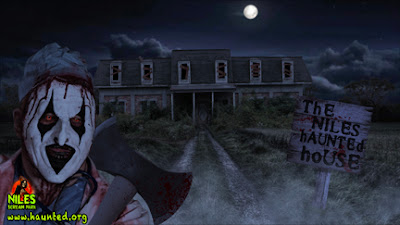 The 2019 haunting season is upon us...and like every year, we kick things off with our annual trip up north to Niles, Michigan to the Niles Haunted House Scream Park. And honestly, this may just be the best year yet. So obviously this is a Must See Haunt for 2019! The Niles Haunted House Somehow this attraction just gets better and better every year. With a mix of indoor and outdoor scenery to scare you silly, the Niles Haunted House manages to stay fresh year after year. Well worth the price of admission and if this house was the park's only attraction, it'd still be worth every penny. N'awlins Nightmare Okay, now N'awlins (New Orleans if you can't tell) Nightmare is something pretty special. Everything from the scene designs to sounds to even the smells is a real thing of haunting beauty. The Mardi Gras atmosphere already lends itself to a scary interpretation and this attraction takes that notion and runs with it. Deadwood The Old West can b
Post a Comment
Location: 855 Mayflower Rd, Niles, MI 49120, USA
Read more

Another haunt season and another trip up north to Niles Haunted House Scream Park...and man was it a blast... Here...we...go... The Niles Haunted House The house sported a cool cinema theme for the past two years, but this year they completely upped their game with a total rehaul as a library and book theme.  And man oh man, this things is insane (in the best possible way).  The Niles House never disappoints, and this year was no different.  My jaw is still on the floor somewhere in there.  The level of detail in that house is second to none.  It's cool, scary and long.  Everything that makes an awesome haunt rock. Grimm's Funeral Services This attraction is 100% new for 2018, and it's simply amazing.  From the mortuary to the graveyard, you'll experience death up close.  And again, the detail and design of this haunt are simply stunning.  Unlike previous years at Niles, the scare actors this year seem to really be trying to bring their A-game.  Color u
Post a Comment
Location: 855 Mayflower Rd, Buchanan, MI 49107, USA
Read more

We finally got around to venturing out and visiting FriteLodge Haunted House for the 2017 season.  We were bummed that we couldn't make it out for the 2016 haunt season.  But that's all bee corrected! Don't Go in the Basement Their theme for this year is a spooky basement one.  And once again, the room designs are out of this world.  I've never made it a secret that FriteLodge goes above and beyond in their decor, so I'll keep pounding that fact home. The actors, despite being volunteers, do a pretty good job of bringing their respected scenes to life and doing the best they can to conjure up a scare. There are two rooms that stand tall above the rest this year, and those are the snow room and the water room.  The snow room is incredible.  Not only are there frosted pine trees, but it's literally snowing in the inside.  And second is the water room, where it looks and feels like you're wading through water (it's all a clever trick using li
Post a Comment
Location: 7525 Acton Rd, Indianapolis, IN 46259, USA
Read more 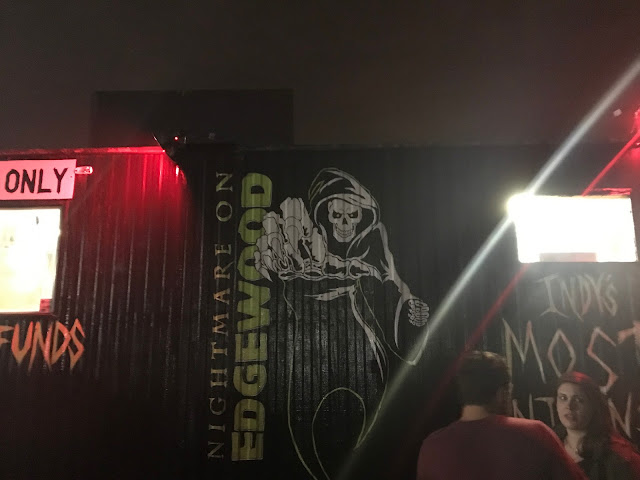 We finally made our way back to Nightmare on Edgewood, our visit since 2014.  Edgewood has always been one of the better haunts on Indy's southside, so let's see if it holds up in 2017! Midnight Double Feature First off, this haunt has one of, if not, the best facades I have ever seen: a full-scale old-school entrance!  I was completely blown away by it and the awesomeness didn't stop there.  Once, inside, the haunt is a straight-up movie theater, complete with entrances to other theaters, full of surprises.  Once you're actually "in" the haunt, we found it very reminiscent of their attraction from 2014, Old School Fright (which I loved).  But instead of regurgitating their older designs, it appeared to be completely re-worked.  Doesn't hurt that all the actors brought their A-games also. Insanity Much like their 2014 attraction Pandemonium, Insanity is their "black-out" haunt.  I'm not a huge  fan of all-dark haunts, but Edgew
Post a Comment
Location: 6004 Camden St, Indianapolis, IN 46227, USA
Read more

It's that time of the year again -- haunted house season is officially here!  And for the fourth consecutive year, we wandered up North to Niles, Michigan for the one and only Niles Scream Park! So without any ado, let's jump into it... The Niles Haunted House Like last year, the main house kept the cinema theme.  But this year, they changed up the movies and the decorations.  The house is notorious for having numerous ways to get through, and unfortunately for us, we only went through the house once so we didn't get to see and experience every route.  But that's okay because what we did see was an easy A+. Possessed This is one of Niles' new haunts this year -- and if you haven't guessed, it's got a demonic possession/Exorcist theme.  And it works.  The set decoration and mood and atmosphere are great.  The only thing I feel this haunt needs is a little more action.  Otherwise, it's a great haunt. Incarcerated Another one of the
Post a Comment
Location: 855 Mayflower Rd, Buchanan, MI 49107, USA
Read more 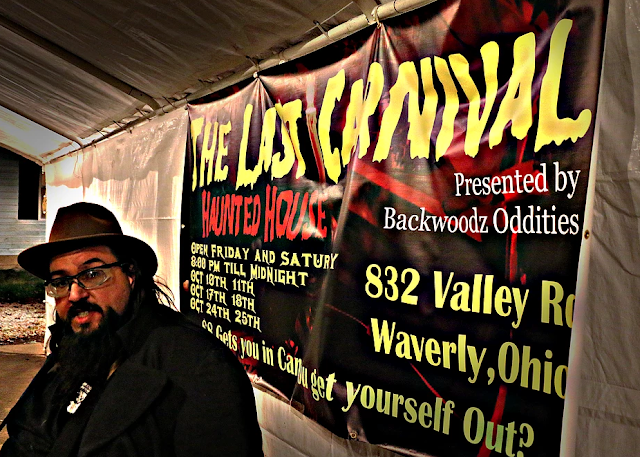 One of Ohio's finest! The Carnival Comes Without Warning! With a slight chill in the air and the wind rustling the autumn leaves, the faint sound of carnival music grows evermore present. Where there was once nothing, now there stands a carnival filled with the most unusual of acts. Erasmus takes pride in how unusual his carnival is, but knows there is more to the carnival than meets the eye. This carnival has been moving from small town to small town for over 150 years. Erasmus has lost count of how many victims have entered. No one has ever kept count of the few that have escaped. The darkness of a human soul is what fuels the carnival. No matter how good of a life you live, there is darkness in you somewhere and it will be drawn out. Each step of the way you are going to encounter increasingly darker and twisted acts. Your reactions will decide your fate. After you have been judged, you will be punished and the Carnival will be fed! Even if you are pure of he
Post a Comment
Location: 832 Valley Rd, Waverly, OH 45690, USA
Read more

Haunted house in Northwestern Indiana. Haunted Hills Hospital holds the most psychotic patients that were too evil for a regular mental facility. The Medical staff used the patients to perform crazy experiments that were supposedly meant to cure them. However, no one was ever helped and the patients were driven further into madness before being left to rot and die. But now the patients are in control! Travel through the hell and terror that has taken over the grounds of Hills Hospital. Will you make it out or will you become the newest patient? Location 4700 Central Ave. Lake Station, IN 46403 Phone 219-241-9498 Website Haunted Hills Hospital
Post a Comment
Location: 4700 Central Ave, Lake Station, IN 46405, USA
Read more
More posts